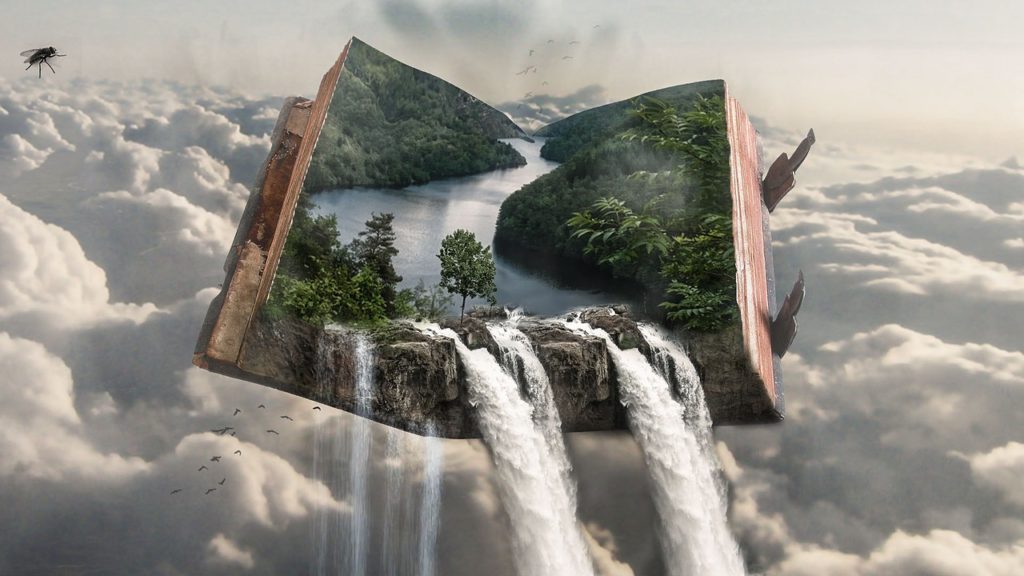 The original Catholic Literary Revival  began in the mid-19 century upon the conversion of Blessed John Henry Newman and lasted until the death of Graham Greene in 1991.

During that gloriously creative period, the Revival passed through what might be termed the Newman period, from 1845 till 1890, the Decadent interlude of Wilde and Co in the 1890s, the period of the Chesterbelloc (Chesterton and Belloc) from 1900 till 1936, and finally two parallel movements in Catholic literature: the Wasteland generation, including T. S. Eliot, Evelyn Waugh and Graham Greene; and the Inklings generation, especially Tolkien and Lewis. What a glorious epoch! What wonderful works of poetry and fiction!

But what happened afterwards? Why did Catholic literature just peter out? More importantly, what, as Dana GIoia has asked, has happened to The Catholic Writer Today?

These are good questions which are not necessarily easy to answer. The literary pause had something to do with the love affair with the so-called spirit of the Sixties with which many who advocated the so-called spirit of Vatican II were afflicted. The spirit of theological progressivism, more properly called modernism, which was unleashed at that time seems to have taken the wind out of the Revival as it seems to have taken the wind out of many other manifestations of authentic Catholicism. In any event, and whatever the reason, the Catholic Literary Revival, so majestic and magisterial in its ascendancy, simply fizzled out and died, though its posterity has enriched the canon of literary masterpieces and therefore has enriched the culture immeasurably.

Now, however, we are witnessing the genesis of a new Catholic Literary Revival, filling those paying attention with a sense of hope and expectation. Most of the first-rate writers of this Revival are not household names, as were the leading lights of the earlier Revival, but this has more to do with the dark times in which we live than with the caliber of the writers themselves. In the 19th Century and for most of the Twentieth it was possible for overtly and unabashedly Catholic writers to swim in the mainstream. Chesterton, Waugh and Greene could wear their faith on their sleeves, and express it in their works, without fear that this would marginalize them. Today, amidst the rise of an increasingly intolerant secular fundamentalism, it is not easy for Catholics to find acceptance in the wider culture. It’s possible, for instance, were Brideshead Revisited to be written today, that it would have been rejected by mainstream publishers purely because of its pro-Catholic stance. As for more robustly Catholic novels, such as The Ball and the Cross by Chesterton or Come Rack! Come Rope! By R. H. Benson, these probably would not have found a mainstream publisher and would need to take refuge in the handful of Catholic publishers of fiction who swim against the secular tide.

Do not dismiss the new generation of Catholic novelists merely because they are being published by small presses and not by the better-known publishing houses, the latter of which have become slavishly subservient to the meretricious Zeitgeist. It is the delight of Catholic readers to explore the works of those contemporary Catholic novelists who have refused to sell their creative souls to the spirit of the age.

Some writers have managed to get past those watchful dragons of secular intolerance, securing contracts with major publishers, in spite of the healthy Catholicism informing their work. Take Tim Powers, a New York Times bestselling author whose works of magical realism are full of a suffused sacramentalism. Declare, set in Europe and the Middle-east during World War and Cold War, and Last Call, set in California and Las Vegas, are especially noteworthy. Another international bestseller is The Awakening of Miss Prim by Natalia Sanmartin Fenollera, originally published in Spanish, which takes us into a haven of sanity in the midst of the madness and maelstrom of modernity, focusing, as it does, on a small community of noble souls who have opted out of the rat-trap of the rat race for a better life, based on those two pillars of the Church’s social teaching, subsidiarity and solidarity.

Two authors who have published what might be called Biblical Fiction, i.e. fiction based upon scripture, are Arthur Powers and Rex Moses. The Book of Jotham by Powers is a mini-classic, me judice. It is a story of the life of Christ seen through the eyes of a mentally disabled disciple. In some ways it is reminiscent of Flannery O’Connor’s novel, The Violent Bear It Away, in which the mentally disabled character is the innocent victim of the sins of the other characters, thereby making him a Christ figure. Jotham in Powers’ novella is not a Christ figure but a disciple of Christ who experiences his Master’s teaching, and His trials and tribulations, with a perspective informed by an innocence that is, at times, heart-warming and, at other times, when the innocence is met with cruelty, excruciatingly heart-wrenching. Azariah’s View by Rex Moses allows us to see the excitement and mystery of the Resurrection through new eyes. The fact that those eyes are physically blind only adds to the metaphysical brilliance. As we view the Passion and Resurrection through Azariah’s eyes we find ourselves startled by the realization that it is we who are blind while the blind man sees. This awareness of our blindness enables us to see with resurrected and wonder-filled eyes.

And then there are the novels of Michael D. O’Brien, whose literary canvas is darkened by an almost overbearing acknowledgment of the power of evil, and yet is lightened by the presence of ineluctable grace.

What about new works of fiction with a contemporary setting? Two Statues by Brian Kennelly explores the impact on the lives of disparate characters of an alleged miracle in a small church on the South Carolina coast. Told with a suggestive subtlety, it treats the mysterious and the supernatural with a nuanced dexterity, which only once falls into a heavy-handed preachiness, the latter of which is an unfortunate blot on an otherwise splendidly painted literary canvas. A Pilgrim Stranger by Mark Samuels has its protagonist, a staunchly traditional Catholic schoolboy, awaken after more than thirty years in a coma. At its best, Samuels’ novel emulates the uproarious satire of Waugh’s early novels, evoking out-loud laughter; at its worst, its lack of charity leaves the reader squirming. Bearings and Distances by Glenn Arbery, set in contemporary Georgia, is full of the unrelenting and brutal behavior of those driven by the egocentrism that theologians call pride. Imagine an atmosphere akin to a twenty-first century Eliotic Waste Land; then imagine the atmospheric canvas being peopled with the sort of human monstrosities that populate the fiction of Flannery O’Connor. Apart from its occasionally heavy-handed use of metaphor, this is true Southern literature in the tradition of O’Connor and Walker Percy. Grotesque and yet hauntingly hinting at grace.

Historical fiction as a genre offers many exciting new works from which to choose. Treason by Dena Hunt takes us to the perils of the Catholic underground in Elizabethan England, a world in which Catholic priests and those who fraternize with them are hunted down and, if caught, tortured and executed. Miss Hunt executes the telling of the story with consummate skill, deserving the comparisons that have been inevitably drawn between her work and Benson’s Come Rack! Come Rope!. Exiles by Ron Hansen, better known by many for his Mariette in Ecstasy, takes as its inspirational source Gerard Manley Hopkins’ masterpiece, “The Wreck of the Deutschland”, focusing on five heroic Franciscan sisters who witnessed to the love of God in the midst of a natural disaster. The Letters of Magdalen Montague by Eleanor Bourg Nicholson is an epistolary novel which exhales the same exuberant and exotic air as Baudelaire, Huysmans and Wilde. Written in the Decadent mode it is a delicious vignette that illumines the path from debauchery to the Divine. Jerusalem, Jerusalem! by Chilton Williamson, Jr., is set in Wyoming in the early 1990s, thereby barely qualifying as a work of historical fiction. The novel’s strength lies in the way in which Mr. Williamson evokes and even invokes the power of the elements as a means of reminding us that we are in a real place in which real people grapple with reality. The characters come alive because they are not living artificial lives, cosseted by the inanities and trivialities of urban life. The work is indeed historical realism at its best. A Postcard from the Volcano by Lucy Beckett is set in Europe, spanning the years from the beginning of World War One to the dawn of World War Two. At its philosophical heart is the conflict between the secular ideologies that plagued the twentieth century and the timeless Faith which transcends the idiocies of secularism.

Another genre that marks the new generation of Catholic writers is what might be called Inklings literature, i.e. literature inspired by C. S. Lewis and J. R. R. Tolkien. The Gargoyle Code by Dwight Longenecker is a spin on Lewis’ Screwtape Letters consisting of letters from “a Master Tempter and his diabolical Trainee”. The Framerunners: In the Company of Angels by Jef Murray is a work of fantasy for young adults inspired by Lewis’ Chronicles of Narnia and taking as its premise the mode of moving from one world to another that Lewis employs at the beginning of The Voyage of the Dawn Treader.

Mystery thrillers also seem to be popular with the new generation of Catholic writers. My favourite of the recent works in this genre is Death of a Liturgist by Lorraine V. Murray, which is full of a gentle whimsy which softens the satire on the follies of liturgical modernism. On a more serious and somber note, The Death of a Pope by Piers Paul Read is a faith-driven theological thriller set in a fictional papal conclave in which modernist intrigue makes a devilish alliance with the forces of terrorism. The final mention of new works in this genre should go to Dying for Revenge by Barbara Golder, the first of a series of crime mysteries known as The Lady Doc Murders, which are animated by the novelist’s experience in the medical profession and her eloquent understanding of medical ethics from a Catholic perspective.

There are more.  Too many to mention them all . One thinks perhaps of Marcus Grodi’s novels, How Firm a Foundation and Pillar and Bulwark, both of which are works of fictionalized theological polemic, a literary genre where fiction meets apologetics. And then there’s the novels of Kaye Park Hinckley and Lee Oser. And we haven’t even touched upon the many new works of poetry. Where does one end?

The creative spirit of Catholicism is alive and well. We are at the dawn of a new Catholic Literary Revival. Catholic readers can help to nurture and nourish this exciting development in the arts by checking out these books, by reading them and by encouraging others to do so.

Joseph Pearce is Senior Editor at the Augustine Institute, editor of the St. Austin Review and author of many books, most of which are in the field of Catholic literature.