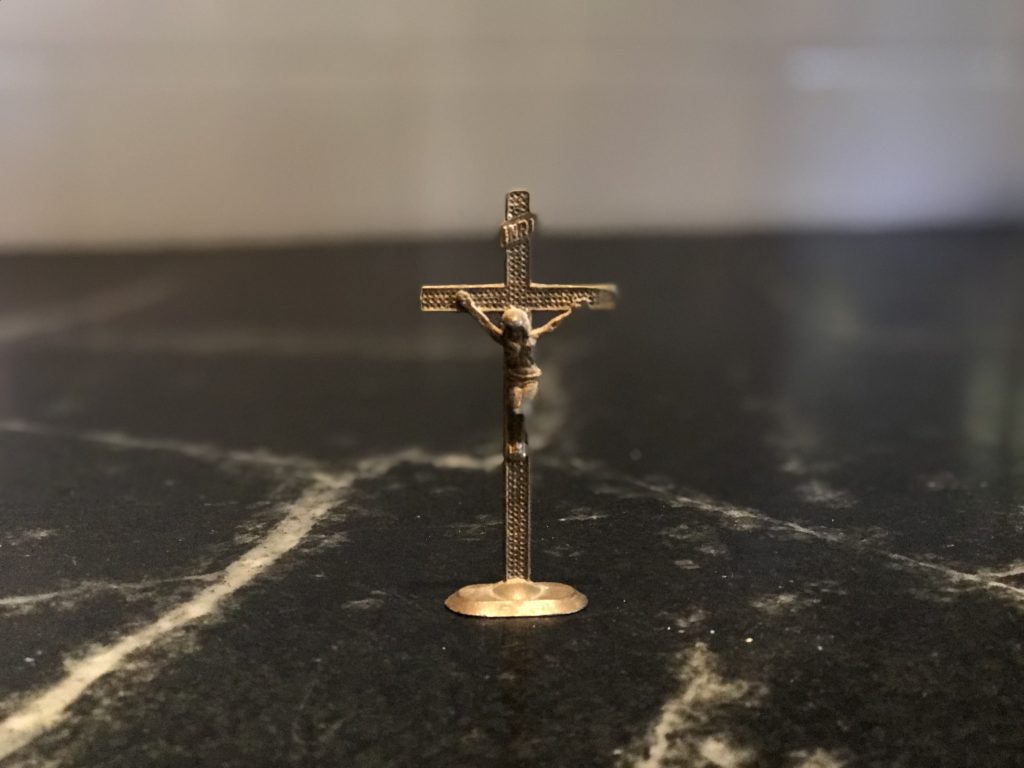 Frank La Rocca: The Crucifix and the Crack in the Door (Part 2)

Editor’s Note: This is the second of a three-part series profiling Oakland composer Frank La Rocca.  Part one, “Frank La Rocca’s Search for the Sacred,” may be read here.

After graduation, Frank got a job teaching at Cal State-Hayward.  Naturally, he wanted to build on that first great success—a favorable review in The New Yorker from the English-speaking world’s most eminent music critic!

But as a composer, he stumbled.

“I tried composing in the same vein but once I was outside the force field of Berkeley I couldn’t quite sustain the commitment to that view of music,” Frank recalled. “It reminds me of that episode of Star Trek where the people have the illusion they are young until they step outside of the boundaries of the force field and suddenly realize they are 90-year-old cripples, not 35-year-old hunks.”

“But at the same time,” Frank went on, “I had dislodged the roots of my native language enough that that part of my musical life had withered. So, I was caught in a no man’s land. I really didn’t want to be a wild-eyed modernist any longer, but I had lost the thread of this more Romantic sound. Composing was a supremely frustrating act and a very discouraging one: What I was trying to do really couldn’t be done—satisfy my inner promptings and still receive all the praise from the elites.”

His composing output slowed to a crawl, as Frank struggled with the contradictions in his soul.  Yet slowly he began to build a new voice: “I began writing pieces somewhat as if Gustav Mahler lived to be 80—romantic but kind of wild and more dissonant-than-usual romantic music.”  Frank described it as “robbing Peter to pay Paul”, a kind of romantic loan to modernism.

Still searching for his natural musical language, La Rocca began flirting with the ideas of some of the American minimalist composers like John Adams and Steve Reich.

In 1990 Frank La Rocca was commissioned to create the opening piece for a concert of new chamber music. By now married with children, he wanted to express something of the joy that his baby girl brought him. Divertimento was the first piece Frank ever wrote, as a professional, that had a traditional key signature, and he dedicated this to his 4-year-old daughter: “She was such a ray of sunshine to me in my life: a pure good. She changed me. She really did. I spent years in a very dark expressionistic Weimar artistic gloom, and she helped bring me out of it.”

Anyone who tells you that the true artist needs no audience, as we pretentiously used to debate during my Yale student days, has never met that many artists. Frank La Rocca cared about how his music was received. After the performance of Divertimento, the reaction in the room was mixed: “Some of my colleagues were wild about it, hyperventilating, so excited and energized saying ‘I can’t even tell you how great that was!’ Others were sort of walking out with heads averted, hoping I did not notice them because they were too polite to say what they really thought: ‘It was a trite work which lowered itself to please people.’”

“I was finally in my mind faced with an ultimate decision: Do I consider the Divertimento just a little flirtation with minimalism and now dive back into so-called real music?” he recalled, “Or do I continue musically exploring that bubbly uplifting minimalist vein? I’m 41 years old. I’m faced with a decision: Am I going to let the real or imagined frowns of my teachers and colleagues determine my artistic life? Or am I going to just say, Damn the torpedoes: Full speed ahead?”

And so he rushed headlong into a new style: “Very rhythmic, energetic, appealing in the way an impressionistic painting is appealing: based on objects from the real world but blurred in a pleasant way. I wasn’t using traditional chords but blurred versions of them that were still recognizable.  The energy was almost like rock and roll, not as crude, but full of rhythmic vitality like really good rock and roll.”

It was a breakthrough: “I was writing classical music but using versions of the harmonies I had fallen in love with as a teenager. Still, it was kind of cool and everybody liked it.  I felt like I’d been let out of prison.”

He called the piece Crossing the Rubicon.

The Crucifix and the Crack in the Door

The musical and spiritual turnings of La Rocca’s soul moved in close conjunction but not always in precise lockstep.  Frank La Rocca paused for a moment and circled back to remember the first step on his journey back to Christ, which happened just before Divertimento.

La Rocca had finished a piece for a coming performance, three orchestral songs based on three poems by Theodore Roethke. He listened to the rehearsal on a Friday. “It was a complete and utter disaster. The music I wrote for the big climactic moment just simply was wrong,” he told me.

The world premiere was in just 4 days. There was just one rehearsal left before the premiere.

In those days, it normally took Frank a long time to compose just one measure of music, “just because of this internal conflict within me.” Now he had to compose 50 crucial measures in 36 hours.

“I fell into despair. I was either going to humiliate myself with a really bad piece or cancel the performance. I fell to my knees. And suddenly God was very real to me like he is to people in foxholes,” Frank told me.

And so, Frank La Rocca found himself praying for the first time in years: “Oh dear God I want to believe in you. I don’t know anymore if you are real, but if you are I need your help. Please dear God I’m not going to be able to do this unless you help me. Please help me. I’m at the end of my rope. Thank you for listening.”

Quite suddenly, inspiration flowed. “It was like Mozart: The pages are flying; my hands are waving. And what I wrote was absolutely perfect, just what it needed to be.” Frank recalled still in awe. “I beat the deadline, recopied the score, all the orchestral parts, went to rehearsal. The performance was a huge success.”

As miracles go it may not rank high on someone else’s list.  But a few days after that, Frank La Rocca trekked up to the bookstore at the parish in Fremont where his older son attended school. “I bought the tiniest little crucifix. I have not been without that crucifix since that day. That was my way of saying to God ‘maybe.’” (The photo above is the crucifix Frank carries with him every day).

Frank La Rocca was convinced his musical inspiration was an answer to prayer. But somehow, he wasn’t yet totally convinced God existed, nor was he sure who He was. Frank La Rocca remained skeptical, doubting, ostentatiously liberal-minded. Still, “That crucifix kept a crack in the door open.”

Sometimes a crack is all God needs.

The Sound of Sorrow Transformed by Grace

“I get tired of hearing myself say this: that wasn’t the last obstacle in the road to my salvation and to my musical calling, that last obstacle was my divorce and my failure to confront my alienation from God,” Frank said to me.

Once again, his soul and his music echoed one another.

“I should send you a video if I can find the last piece I wrote in that bubbly minimalist style,” Frank told me. He called it Fourplay.

“It just ends very strangely. The music is bubbling, bubbling and then suddenly it veers off into this very dark and doomful, somber place,” Frank stared at his hands. “It’s very, very beautiful, but it’s dark.  The music goes on like that for a minute and a half and then it just stops. It’s a completely strange piece.” (To hear it for yourself scroll to the bottom of the page).

“After my divorce, I could not make myself go back to the happy-face music of the beginning. It rang hollow for me.”

He says he didn’t understand the piece when he wrote it. Years later, he renamed it Precipice.

“It’s only in light of all that I’ve learned about my own journey as a Christian in the intervening 20 years that makes me realize there was something a little inauthentic about that happy bubbly music. Not that I did not offer it sincerely, but some part of me, in light of my divorce and all the pain associated with that, wasn’t telling the whole truth. What I discovered instead was true life, life in Christ. The sound at the end of that string quartet has become an exemplar of the harmonic language and kind of sound that people who know only my choral music would recognize: luminous but with a kind of dark undercurrent, though not a darkness of negation or emptiness. Somebody once asked me why people describe my sacred music as ‘luminous.’  What is that? And I said, ‘that it is the sound of spiritual sorrow transformed by grace.’

Like Dante, La Rocca’s full turn to Christ came through a beautiful woman: Lucia. They were friends. She invited him to a charismatic non-denominational multi-racial evangelical Church in East Oakland she attended: “You got people dancing in the aisle, you got people shaking in their seat, you got people speaking in tongues, it was really wild. They just got done singing a beautiful praise song in the way they do the Gospel tradition. When its over, it’s not over: The organ player keeps playing, people keep humming, they are trying to draw the Holy Spirit down on the congregation through this music.”

Then it happened to Frank: “I see this beautiful young woman twirl right across the foot of the stage and right at that moment I had a real road to Damascus moment, something inside of me just broke, some barrier, some obstacle some something just broke. I felt like I had been split open and some indescribable force had rushed in to fill me up. I knew that is was the Holy Spirit. I knew without a doubt that it was God.”

So at age 44, Frank La Rocca became a Protestant.

That was 1995. His return to the Catholic Church would not happen until 14 years later.