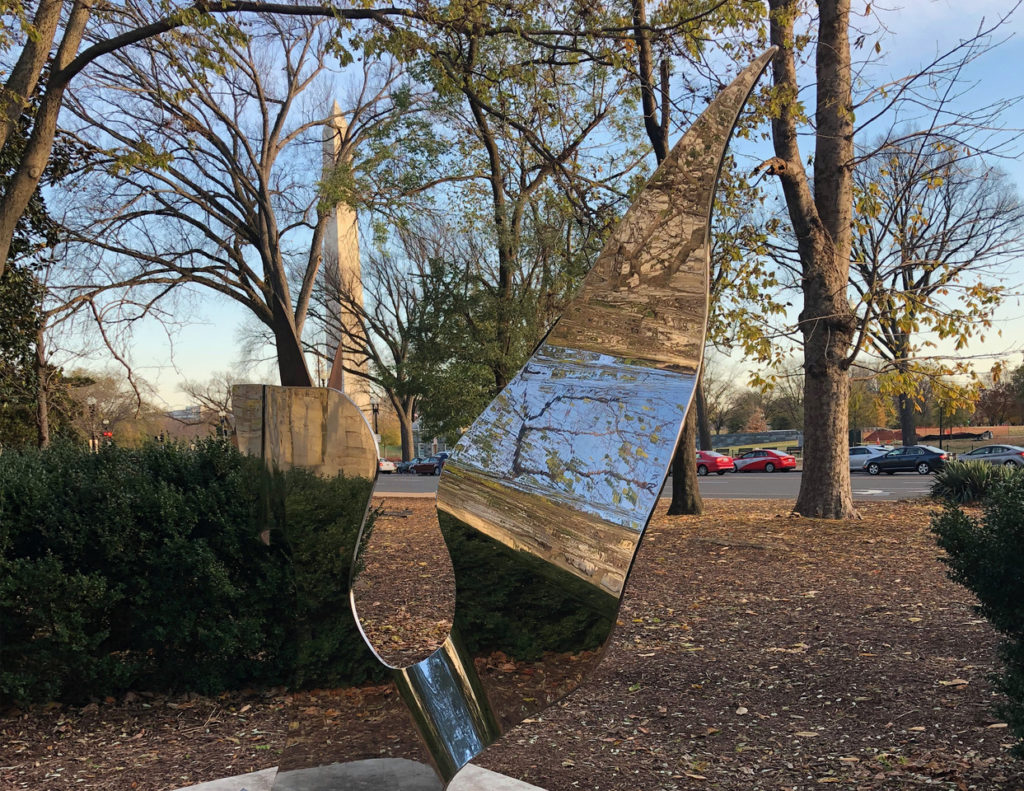 Guatemalan Jose “Pepo” Toledo Ordóñez’  is not a household name in this country yet, but he has a rising reputation internationally and happens to have an installation in Washington D.C., my hometown. And, as luck or God would have it, I was headed home for a visit over Thanksgiving.

I looked up and suddenly saw I was directly across the street from The Washington Monument: Home.

And then I turned my head and there it was: The Angel of Peace.

That was my first encounter with Pepo’s sharp-edged angel with hard wings of steel. I shivered.

What was Pepo thinking?

Meeting The Angel of Peace

As I circled the Angel of Peace, taking photos, I kept thinking about what peace means:  How can steel and chrome express peace? Steel is paradoxical: it can appear harsh, but it can also become invisible when reflecting light. Its edges look like they could slice flesh, but when rounded off, steel becomes marvelously shiny and variegated. Steel wings do not move, but they reflect the life and movement around them: cars speeding around the Monument, crowds strolling on a Friday afternoon, even this photographer got captured in the reflection.

Is peace something maybe stronger than we think? Strong as steel? When God gives us His peace, is it something like as powerful as He is? Angels pronounce, “Do not fear!” When angels speak that way, is it because they are so strong?

At that point, having completely circled the sculpture, I stopped and suddenly saw The Washington Monument enfolded in the wings of the Angel of Peace: A  happy vision of God’s grace in our world.

After this unexpected encounter, I phoned the Guatemalan embassy to arrange a meeting with the ambassador’s cultural attaché, Rudolfo Contreras, for that very afternoon. I wanted to see more of Sr. Toledo’s art. Arriving at the embassy, I was again confronted with an amazing and strange sculpture.This time, the sculpture made me feel a little disturbed, not like the emotion of the angel sculpture.

What was Pepo trying to express here?  However, when I learned the title of the piece, I thought it explained Pepo’s purpose, “Released Energy!” Yes! The sculpture made me feel as though the steel was trying to undo itself, expressing for me that desire in Ephesians (4:22) to “put off your old self” so as to be “made new.”

[Editor’s Note: See the sculptor’s website about these sculptures and more in the series at the following URL: http://pepotoledo.com/wp-content/uploads/2015/03/Dangerous-Sculptures-Pepo-Toledo.pdf]

The Guatemalan cultural attaché was very gracious to a last-minute visitor on a Friday afternoon who did not know much about modern Guatemala. On Saturday, while waiting at the ambassador’s house to be admitted by the housekeeper, I saw another piece of Pepo’s Urban Sculpture series in their side yard.

How different the art seemed while contrasted with living greenery: This time the sculpture expressed the outlandishness of civilization when compared to the relief of verdure. It brought to mind the instruction in Ephesians not to struggle against “flesh and blood,” but, rather, we are to fight “against the rulers, against the authorities, against the powers of this dark world and against the spiritual forces of evil in the heavenly realms” (Eph. 6:12) so as to take our “stand against the devil’s schemes.”

How did this art come to be? The sculptor’s journey is as fascinating as his work.

From Car Fanatic to Government Reformer

When José (Pepo) Toledo Ordóñez was a young man growing up in Guatemala, he was fascinated with the mechanics of cars. Many no doubt thought their friend Pepo was destined to be a “panel beater” (Central American slang for a car mechanic). But his spiritual journey took a sort of Zen and the Art of Motorcycle Maintenance turn: “The place to improve the world is first in one’s own heart and head and hands, and then work outward from there,” as Robert Pirsig wrote in that famous novel.

Pepo had a heart for car mechanics when a boy.  But as an adult, he developed an enthusiasm for the dynamics of how entire countries are engineered, before returning, late in the day, to a new form of “panel beating.” But I get ahead of myself.

Pepo got his B.A. in economics at Mariano Gálvez University in Guatemala and rose to lead a number of government agencies and reform efforts. He led a campaign to outlaw lead in gasoline, first in Guatemala, then in all of Central America, for example. Next, he helped reform the Aurora National Zoo, bringing suffering animals out of cages and into a natural habitat. He also helped lead the government’s initiative to provide electricity in rural Guatemala.

After years of being an administrator at various government agencies in Guatemala, Pepo began to yearn for artistic expression. First, he launched a new career as a patron of artists, providing venues and encouragement. Then in 2010, Pepo’s creative expression exploded and his knowledge from his own “panel beater” youth called back to him––not in order to fix cars––but, rather, he was inspired to create, to sculpt steel.

“When I was appointed president of the national electric power commission, I had to open the electricity market to competition. The battle was against a group of monopolistic companies owned by very powerful people. I dedicated it to God. I never used guards or armored vehicles. I do not understand why many prelates of the Church or pastors use them. Faith is faith. After two and a half years, I opened the market. They did not forgive me. They sued me criminally for nine years. But God did not let them put their hands on me.”

When one door closes, another opens.  Pepo lost worldly political power and so he turned himself over to “panel beating” as a profession again, this time, marvelously, not to fix cars, but as his creative exploration of his faith.

In less than ten years as an artist, Pepo has had 45 individual exhibitions and 36 public sculpture exhibits in Germany, Geneva, Paris, The Hague, Amsterdam, Washington DC, Mexico, Costa Rica, and Guatemala, among other countries.

Pepo grew up in a Catholic family, educated by Jesuits. He tells me: “Success comes when you put yourself in God’s hands, and failure comes when you distance yourself from him.” Certainly, his family has been in God’s hands: his mother’s sister (Sister Maria de Lourdes), and a cousin (Sister Luz Elena), are both religious, in the order of the Congregation of the Sisters of Bethany, Consoladoras de la Virgen Dolorosa. And his cousin, Monsignor Francis Wurmser, was ordained in Rome in June 1993.  And through almost the entire expanse of Sr. Toledo’s career, he has enjoyed that profound and mysterious relationship of marriage with Regina Mejía, his wife of 44 years, affirming his commitment to his observation that “staying close to God brings success.”

A Miracle in Switzerland

Pepo’s extraordinary journey in life and art reflects his deep faith in God. He gave me one of many examples: “The United Nations is dedicated to promoting and defending abortion, gay marriage, gender diversity, and many other anti-values,” Pepo told me. “The art world is not the exception. Guatemala is a 90 percent Christian country, counting Catholics and evangelical Christians. In spite of that, I have received rejection and ridicule for being a Christian not only in art but in daily life,” he told me.

But he has also seen miracles happen. “I dedicate my public sculptures to God as altars to communicate the good between heaven and earth,” he explained, “That’s why I put them in key places. The day I unveiled my Angel of Peace in the Palais des Nations gardens of the United Nations in Geneva, the Deputy Director of Culture told me: ‘It is a miracle that you have been allowed to put an angel here because religious themes are prohibited.’”

And then a few minutes later, the office director gave a speech about the art, “This angel is in the sense of what we do in the United Nations.”

Pepo told me: “That day I witnessed two miracles.”

Meg Tufano, M.A., is a native Washingtonian who now lives in Oak Ridge, Tennessee, with her husband of 38 years, the scientist, Dr. Daniel R. Tufano. An Affiliate Professor of Critical Thinking at Antioch University, she currently teaches “Foundations of Civilizations” and writes fiction and essays. She can be reached at mtufano@antioch.edu