On January 21, 2023, the clear, sweet voices of the Chamber Choir of St. Brigid’s School will rise in a new choral Mass commissioned by Archbishop Salvatore J. Cordileone to begin the West Coast Walk for Life in San Francisco. This Holy Mass will launch the day’s walk in celebration of the human gift for life and the urgent, ongoing need for the protection of the most vulnerable in society—the unborn.

“Quite some time ago I foresaw that the Mass preceding the annual Walk for Life—which always falls on the Saturday closest to January 11—in the year 2023 would be the perfect occasion for commissioning a new Mass of sacred music, as it would be the 50th anniversary of the tragic Roe decision,” said the Archbishop. “The massive killing of the unborn for over fifty years cries out to heaven for a special Mass honoring the sacredness of all human life, from conception to natural death.”

The new Mass’s complete title is the Mass of St. Agnes in Thanksgiving for Human Life. The memorial of St. Agnes, virgin martyr, is the day of the debut of the music at the Cathedral of St. Mary of the Assumption.  In the Archbishop’s words, the theme of the Mass is: “Gratitude for the gift of life, no matter how challenging the circumstances: gratitude for the gift of being in the world and for the immense gift of being loved by our Creator. Also, prayers for the souls of all those whose lives have been cut short.”

The commissioning of this Mass is part of the tradition that the Archbishop, largely through the work of the Benedict XVI Institute for Sacred Music and Divine Worship, is revivifying by commissioning new Masses. He explains, “The idea is to identify major contemporary themes, and use the beauty of sacred music to highlight the issues and unite people around them. Because Frank La Rocca, our composer in residence, was already occupied composing the ‘Messe des Malades honoring Our Lady of Lourdes’ that will be celebrated at Oakland’s Cathedral of Christ the Light on February 11, the Mass of St. Agnes in Thanksgiving for Human Life is not a Benedict XVI Institute project.”

This Mass for Life was composed by Christopher Mueller, a decades-long musician and choirmaster, with unique elements chosen by the Archbishop to highlight thanksgiving for the gift of life.

Foremost among the Mass’s unique attributes was the Archbishop’s request that the Mass showcase the children’s voices at St. Brigid’s Choir School. The 20 children who will sing this Mass are the elite Chamber Choir consisting of 5th-8th graders, “who learn more advanced repertoire and who have demonstrated superior musical skills, as well as a sense of responsibility and commitment,” said Chris Tietze, cathedral music director. “The children are very receptive and enthusiastic about this new work and are excited to be a part of the premiere.”

Given the time constraints of learning new music, the children will be accompanied by adult singers, thus continuing a sacred music tradition of mingled adult and child voices begun prior to the Renaissance.

The ten movements of the Mass are sung principally in Latin with the post-Communion oratory sung in Latin, Spanish, and English. Mueller composed both the Ordinary sections (Kyrie, Gloria, Sanctus, Agnus Dei) and the Propers, those texts that define the specificity of a liturgy and interweave themes from a feast day throughout the Mass (Introit, Gradual, Alleluia, Offertory, Communion, and post-Communion).

Responding to the Archbishop’s request, Mueller composed the post-Communion meditation based on text taken from the first five verses of the book of Jeremiah when God commissions the youthful Jeremiah as a prophet. Adult tenors and basses sing God’s words, fittingly in Latin, and the children’s soprano and alto voices answer in English and Spanish, then combine with the adult voices in Latin as Jeremiah accepts God’s will by stepping into his role as a prophet.

The text of the post-Communion meditation begins with God’s words to the young Jeremiah: “Before I formed you in the womb, I knew you.” The Archbishop chose this same text to begin his May 2021 pastoral letter on Abortion, Communion and Catholics in Public Life.  These words harken to one of the great mysteries of God’s relationship with man—God’s intimate and loving knowledge of and unique plan for each person before conception.

“Even before birth, our introduction to human society, we are known and loved, and God has a vocation for each one of us, some special purpose for which He has brought us into the world. We matter,” said Archbishop Cordileone.

This post-Communion meditation will allow the listeners a time of silent meditation on the horrific and willful killing of the innocent in the womb. Archbishop Cordileone’s words affirm that “the innocence of children is a cry for all of us to do more, sacrifice more, and think more about how to support babies in the womb—and their mothers.  We love our children; let that love inspire us to face down the horror of abortion and choose life.”

Mueller anticipates this post-Communion movement to be the most emotionally charged section for listeners due to the particular innocence conveyed musically by children’s voices.  “When people hear beautiful children’s voices, they don’t have an intellectual construct about the level of vocal training. This allows a well-trained youthful voice to reach deeper into a listener’s heart. Children’s voices can have a more direct effect. A children’s choir is the perfect sonic realm for this Mass.”

As the director of the Foundation for Polyphony and Chant, Mueller has long composed and championed both Gregorian chant and Renaissance polyphony. In this Mass, he also used rhythms from the 19th century American hymnal, “The Sacred Harp.” Bringing elements of these traditions into this new music enabled him to utilize sacred music traditions while also responding to the themes of life, thanksgiving for God’s gifts, and hope.

Mueller’s Mass compositions feature inter-related chants based on Gregorian chant in the Gradual and Alleluia. The Introit, Offertory, and Communion contain some imitative counterpoint and select modern harmonies. The post-Communion meditation does not incorporate chant, but rather is focused through melodies and accompaniment reflecting a more modern style.

At the Archbishop’s request, Mueller composed the Ordinary parts of the Mass to allow the congregation’s participation. The first decision was to use the chants from the Missa de Angelus, the most widely used and known Latin Ordinary Mass, for the Kyrie, Gloria, Sanctus, and Agnus Dei. The second decision was to animate the congregation’s involvement in the three-fold process by beginning with the children’s voices and soft organ, then moving to parishioners’ and children’s voices with a fuller organ, then adding the adult choir’s participation with imitative counterpoint or polyphony.

The liturgical realities reflected in this process reflect a decades-long acknowledgement by Holy Mother Church that active participation by the people in the pews is crucial. Even prior to the Vatican II Council, Pope St. Pius X introduced this concept in his motu proprio Tra le sollecitudini in 1903 by advocating for the instruction of the faithful in standard Gregorian chants in Latin. The Council itself recognized a place for choral music in Sacrosanctum concilium, which gives the example of sacred polyphony as a type of music that is not strictly Gregorian chant but is suited to liturgical action.

“So there is room for both: congregational singing and choral singing that is beyond the capacity of a typical congregation.  Chris Mueller’s newly composed Mass reflects this proper balance,” said Archbishop Cordileone.

“Children singing on their own, then with people in the pews—adults, adolescents and children—and then with adult professional voices.  All make a contribution in their own unique and equally valuable way. It is a brilliant way to use music to point to this fundamentally important reality of our God-given human dignity,” said the Archbishop.

“The Walk for Life Mass is always the proper way to start such an important day,” said Eva Muntean, founder of the West Coast Walk for Life. “When we go to Mass everything we do is put into the proper perspective, which means God comes first. The Walk for Life Mass is one of the most well attended Masses of the year at the Cathedral. To see so many Catholics worshipping God together and standing for his littlest children gives such a feeling of fellowship and unity.  It is unforgettable. This Mass, which I’m sure will be breathtaking, will be a hymn to the beauty of human life. I expect that beauty to energize our people.”

Sacred liturgy seeks to give form to and elevate the human longing for God and also, in some partial way, to satisfy it.  Sacred music has the power to both glorify God and give back to God, the Author of all beauty, something of human construction that is beautiful.  In the words of composer Christophe Mueller, “If the music helps you pray, then it does its job. The Mass isn’t a concert; the music has to support and serve liturgical action.”

The commissioning of a uniquely suited, new choral Mass on the theme of gratitude for human life serves as a reminder of how important it is to find the path God intends for the use of the particular gifts He has given us.

As Archbishop Cordileone puts it: “God has given us all the same basic human vocation: to be happy with Him now in this life, and perfectly so forever in the life of heaven. We do this by stewarding wisely and generously the gifts He has given us. Some of those gifts we share in common. But many are specific to the individual, particular talents unique to each one, that we are called to use for God’s purposes, for spreading and sharing His love. It’s not how talented that one is that really matters, but developing the talents God has given us and using them to do His will.”

“It gives me great joy to recognize this call, and to help and animate others in responding to it, especially in a way that brings people together and ennobles us, and opens us up to God’s grace through the experience of His beauty. This is what I find most rewarding in commissioning new Masses of sacred music, such as the Mass of St. Agnes in Thanksgiving for Human Life.”

As thousands of people gather to pray this new Mass to begin the West Coast Walk for Life and the voices rise to heaven in song, may we all become stronger in taking a stand against the holocaust of abortion.

Sarah Cortez is president and founder of Catholic Literary Arts, www.catholicliteraryarts.org. A freelance writer and editor with fourteen books, she resides in Houston, TX. She is a fellow of the Dallas Institute of Humanities and Culture, a Scanlan fellow at the University of St. Thomas, and a fellow of the Virginia Center for the Creative Arts. www.poetacortez.com 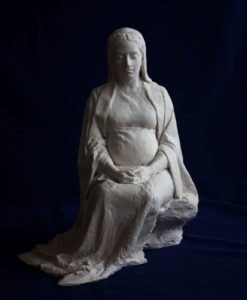