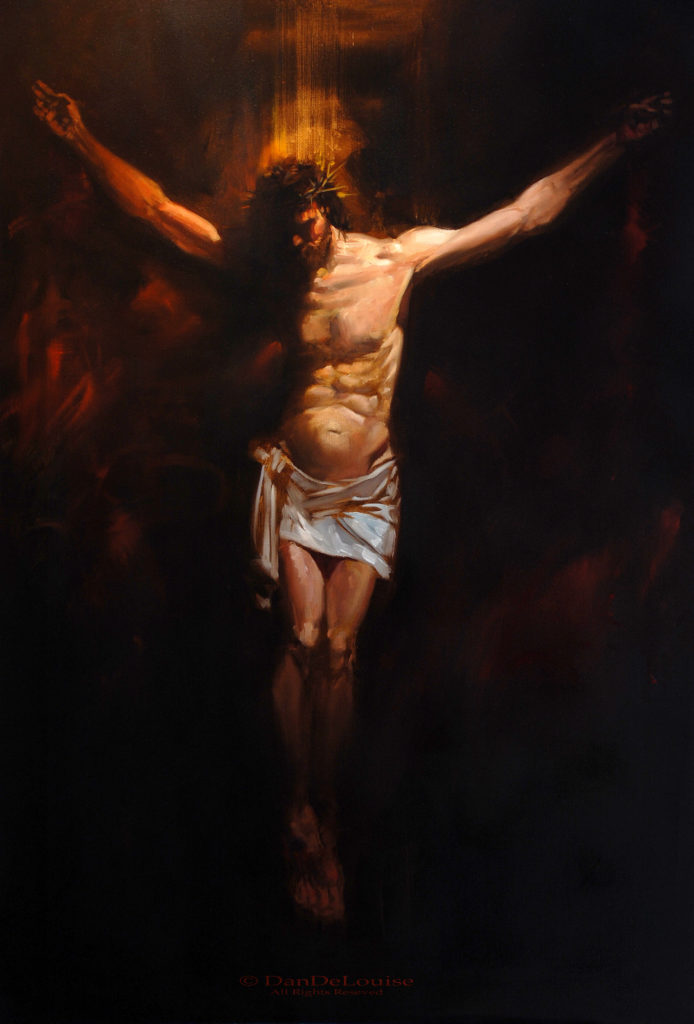 Stroll the wide sidewalks of downtown’s Main Street in seaside Rockport, Massachusetts, home of one of the U.S.’s oldest artist colonies.  You’ll see a striking oil painting of the Crucifixion in a front window of a gallery: Christ’s body hangs, a whitened cipher painted in the unabashed agony of redemptive sacrifice.  Dan DeLouise is the Crucifixion’s painter and the gallery that displays it is his own. The path that has brought this artist known for his secular work to this moment in his career has been winding, unpredictable, and deeply spiritual.
Like the Wyeths, he began his career as an illustrator.  A Long Island native, DeLouise graduated from Syracuse University with a major in commercial illustration after a two-year stint at a junior college. Five years of pounding the pavement in Manhattan’s mean streets brought him commercial art assignments, and eventually a specialization in the toy and game industry.  Recruited by Hasbro for a rare in-house position as an illustrator, DeLouise focused on the digital techniques required for commercial fantasy art.
With time, the physical art-making skills that he had previously trained in and utilized in mediums such as oil, gouache, and watercolor seemed to him to deteriorate.  As Dan DeLouise puts it “my skills as an artist were in jeopardy” despite (or perhaps because of) his commercial success.
In addition to this troublesome erosion of certain of his technical skills, DeLouise missed “the interaction of the artist and the paint,” he told me. This crucial incarnational aspect of art-making had become too distant. Another missing piece, he said was the internal dimension inside the artist illumined by St. John Paul II’s words in his “Letter to Artists” (1999): “In producing a work, artists express themselves to the point where this work becomes a unique disclosure of their own being, of what they are and how they are what they are.”
Certain new moral challenges arose for DeLouise in the corporate arena, such as an assignment to work on Ouija boards.  He settled that particular conflict out to the satisfaction of his conscience, but on the horizon more conflicts clearly loomed. DeLouise decided to quit his job and instead devote himself to a freelance painting career, principally working in oils.
Soon afterwards, as he walked through Rockport’s commercial center in 2013, Dan DeLouise found himself face-to-face with a “For Lease” sign on the front of 53 Main Street, a three-story, shake-cedar shingled building with several street-front arches, only feet away from a men’s retailer selling a wide array of woolen plaid shirts and waterproof footwear. He only meant to inquire about the cost of a lease, but instead moved by impulse or the Holy Spirit, he signed a contract for the space now called DeLouise Studio.  He began painting nonstop.
The demand for his plein-air landscapes provided income (and still does), but DeLouise’s invigorated commitment to painting outdoors brought something else—a deepening relationship to God.  “There is a certain closeness to God when you are painting in nature,” DeLouise mused to me, “There is something about seeing God’s creation and trying to emulate it.  Many artists have spoken about it—such as, contemporary painters David Curtis, Mitch Baird, Jonathan Stasko.”  Other personal matters pushed DeLouise to seek the solace of daily Mass and a deeper prayer life, both of which sustained him and his burgeoning artistic outpouring.
But within a few years DeLouise experienced a deep yearning to paint another kind of art: sacred art.
The first image that called to DeLouise to paint it was the Crucifixion.  It is this painting of the Crucifixion that can still be seen today through a large front window, only a short walk from the ice-cream parlor and near the Pendleton shirts next door.

DeLouise’s Christ hangs suspended on a muddied background, arms outstretched without even a cross.  Clearly, He is nailed and, just as clearly, racked by the physical and mental torture required to attain the redemption of mankind.  A light illuminates Christ from above and brings his blood-drained, whitened flesh into focus in the shoulder and torso area on one side of the corpus.
Much of the painting’s power derives from the omission of standard attributes: no cross, no halo, no crowd of holy mourners, no INRI placard above Christ’s head. Gone are the other figures typically portrayed in attendance at the Crucifixion: the crucified robbers flanking Jesus’ cross, the Roman soldiers. In fact, Christ’s legs and feet below the knees barely appear. One nailed hand recedes into darkness, while the thorns on Christ’s head assume cruel prominence.  The painting becomes a crucible for all the elements of Christ’s self-sacrifice and functions like an alchemical crucible to concentrate them into their purest form: Jesus Christ Himself.
Christ’s head inclines downward (toward the viewer’s left), so there is no accusatory gaze or tender eyes of merciful acceptance. Perhaps, this Christ is already dead; perhaps He is overcome with exhaustion and pain, hanging limp until His final moment. Only the viewer can supply his/her own relationship toward the Christ Crucified, toward the already (or almost) completed gift of redemption purchased by Christ’s obedience to His Father’s will.
This extraordinary reach into the viewer’s soul to complete the painting accounts for part of this image’s power. Sometimes people stop in front of this Crucifixion and kneel in the street; sometimes people stand and openly weep. Some people keep walking and ignore the 36” x 24” canvas. There have been no negative reactions and a wealth of compliments.
DeLouise had thought about painting the Crucifixion for five years before he summoned the courage to begin. He fretted about the difficulty of painting such a complex religious image and worried over whether the appropriate references in the historical tradition could be correctly honored. A visit to the Louvre and its acres of sacred art ignited his passion to paint Christ Crucified: “When I returned from the Louvre, I painted it—which wasn’t what I had planned to paint or thought of doing.  What came out from the brush wasn’t mine, almost.  It typically would take me two weeks to paint a canvas of this size, but this painting took me two days.  I’ve never experienced anything like this at all.”
DeLouise offered the painting as meditative art to his parish where it was displayed on the altar from Holy Thursday to Holy Saturday. Immediately after, the Covid-19 shutdown began and he brought the painting to his gallery where it provided solace to all viewers through one of the large front windows with a light illuminating it throughout the entire night.
To his surprise, he has found a burgeoning market for his works of sacred art. One of his sacred paintings is entitled “Under Watchful Eyes” showing a calm, but alert, Blessed Mother with a drowsy Child Jesus.

Foremost in DeLouise’s mind is a desire to paint spiritual truths as they should be painted, grounded in tradition and truth. “I want to gain more knowledge so that I am honoring God as He should be portrayed, that I am portraying Truth so that I don’t confuse people. Sacred art reveals the spiritual understanding of the artist,” says DeLouise, “This is a responsibility we have as artists of sacred art.”
Daily Mass and frequent reception of the sacraments of Confession and the Eucharist sustain DeLouise: “We forget how transforming the Eucharist is. It is the one thing that has changed me the most.”
If you stroll down Main Street in Rockport, Massachusetts, pause in front of DeLouise’s gallery.  Peer beyond the white window sills. Allow the deep mystery of Christ’s sacrifice to transfix you. The interior movement of your heart will complete the Crucifixion painting’s meaning revealed through Dan DeLouise’s artistry. Stand and weep, or kneel and pray. Do not keep walking.  Allow yourself to be both wounded and healed.
Sarah Cortez is president and founder of Catholic Literary Arts. http://www.catholicliteraryarts.org
Dan DeLouise can be contacted at http://www.delouisestudios.com 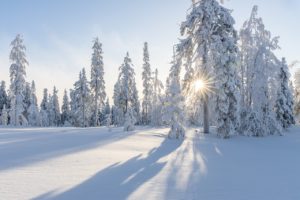