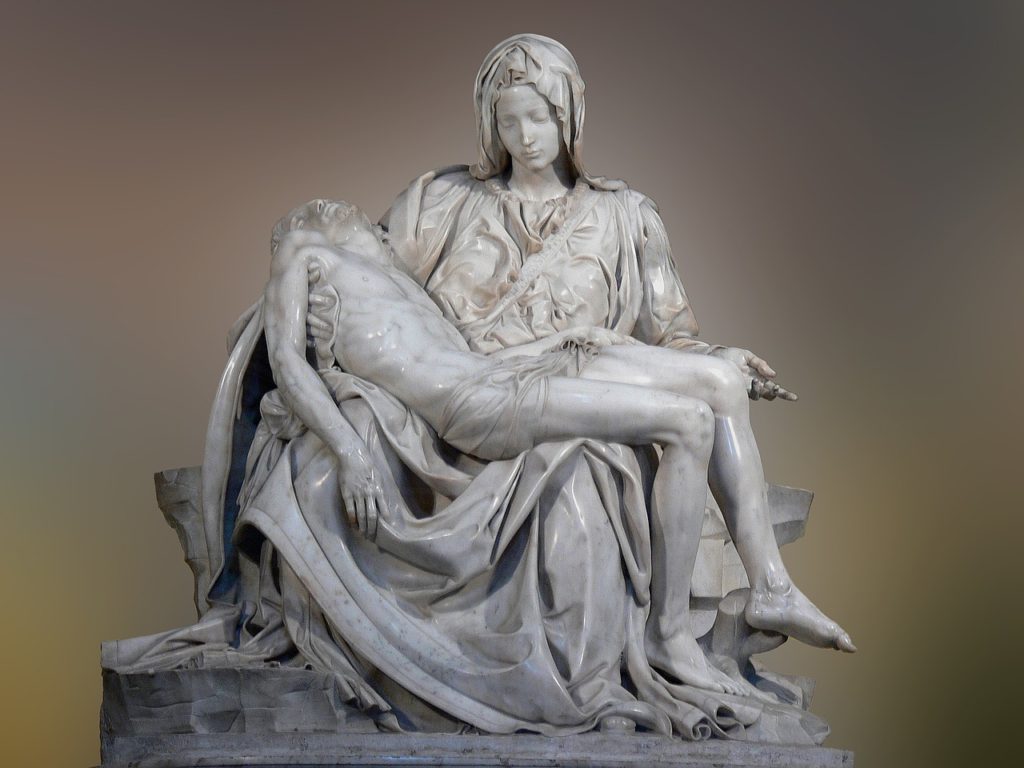 Editor’s Note: This is the third part of a three-part profile of composer Frank La Rocca.

The first part takes La Rocca from his Catholic Jersey boyhood through the rock n’ roll revolution, his loss of faith, and his youthful decision to become a composer of classical music, trained at Yale and Berkeley in the harsh 12-tone ideology. This part of Frank’s story can be read here. The second essay tells the story of Frank La Rocca’s conversion as a Protestant at age 45 and his search for a new musical voice that reflected the new movement of his soul. Read it here.

In this, the third and final essay, tells of Frank La Rocca’s ultimate journey as a choral composer of sacred music, and of his return to the Catholic faith:

Frank and Lucia married happily. But after his road to Damascus conversion to Christianity, Frank La Rocca the composer fell silent for a couple of years. “I knew my conversion to Christ was a profound change in who I was; I would have to wait until I understood how I should let it impact the music that I write. It wasn’t at all clear to me,” he mused.

If you are a late-bloomer in terms of knowledge the great Catholic sacred music tradition, let Frank La Rocca reassure you, you are in good company:

“Except for one brief music history course I took as an undergraduate at Yale I didn’t know any music before Bach,” Frank La Rocca told me, “Here I am, I’m 50 years old, with music degrees from Yale and Berkeley and I am just becoming aware, through Arvo Part of all people, of this great treasury of sacred music and Gregorian chant in the Catholic church. I was utterly fascinated by Arvo Part’s music: the melding of Orthodox and Western spirituality in the chant.”

David Stein, the Director of Choral Music at CSU Hayward (where La Rocca taught) asked him for a piece.   Frank decided the first piece he would write as a Christian would be a kind of penitential prayer to God: Exaudi. “I stitched together a text out of what are called the 7 penitential psalms.”

The seven penitential palms, so named as early as the 6th century in Cassiodorus’ commentary, are the psalms that particularly express sorrow for sins e.g. “O Lord, rebuke me not in the indignation,” “Blessed are they whose iniquities are forgiven,” and “O Lord hear my prayers, and let my cry come unto thee.”

Many of the greatest composers in history have set these psalms to music including: Sir Thomas Wyatt, Bach, William Byrd, Sir Philip Sydney and others.

Although not yet a practicing Catholic, this sacred music spoke to Frank La Rocca as he composed Exaudi: “I started from the basis of a melody that sounded like a Gregorian chant. I put it into a very dense texture, similar to the style of what they were then calling the Holy minimalists, especially Henry Gorecki the Polish composer. There wasn’t a great difference between what I wrote and Gorecki and the other Holy Minimalists except in the way that it sounded. To an amateur, I know that sounds oxymoronic, but under the skin it wasn’t that different.”

David Stein was utterly blown away by it. He encouraged Frank La Rocca to write more music for chorus. That was 1998. His new work continued to find new fans and new outlets.

Today political themes are taking over ever new spaces. “It wasn’t that way even 20 years ago. I could send my sacred music out to completely secular choirs, and if they liked it they would sing it,” he told me, “But one choral director of a pretty darn good choir recently told me straight out, ‘I’m interested in any kind of music and any kind of culture except for Western Christian culture.’”

Even before he returned to the Catholic Church, Frank La Rocca’s search for the sacred burst through those ideological walls. How did your music change when you became a Catholic? I asked him. “It was already Catholic I just didn’t know it,” he told me, “Gregorian chant and sacred polyphony are such a persuasively good model for writing choral music with a sacred essence at its core, I was already writing Catholic music.”

After he returned, Frank thought carefully about what his first piece writing as a Catholic ought to be:  “It dawned on me that something Marian would be distinctively Catholic.  So I composed an Ave Maria and dedicated it to an old Cistercian Nun, Sister Columba Guare, O.C.S.O., with whom I had become friends, and whose health was failing.”  Frank La Rocca sent it to her and told her he had come back to Catholicism.  Sister Columba Guare had something to tell him too: “She said her whole community at Our Lady of the Mississippi Abbey in Iowa had been praying for my return to the Church.” (You can listen to La Rocca’s Ave Maria below).

What changed after his return to the Catholic Church is that Frank La Rocca decided in some pieces to more explicitly model his music after the work of Renaissance composers. “I made a conscious attempt to create music that says: ‘Here’s something very intimately connected with the church’s great sacred treasury that also shows that we can strike new some facets onto these historical gems.’ That’s where I get the comment the music I write sounds simultaneously old and new,” Frank said. “I wanted and want to more intentionally connect myself to the Sacred Treasury of polyphony while working as a composer in the 21st Century.”

And not just any kind of composer: a composer of sacred music.

“It can be very hard to do. It’s too easy to lapse into mere pastiche. Nobody can make a checklist of what the boundaries are and yet you can recognize when something brings in a whiff of worldliness that doesn’t have any place in music for the liturgy. Music in the liturgy serves as a sacramental. It serves as a means of grace and should dispose the congregation to cooperate with that grace, through interior participation.” Frank La Rocca told me.

Today, he continues to compose primarily choral music for both sacred and secular choirs. The California State University East Bay Singers premiered his “Remember” (from a poem by Christina Rossetti) on June 2, three of his works were performed at the London Festival of Contemporary Church Music in May, and local premieres of “Remember” are scheduled in Arizona and Ohio this Fall.

Most exciting, he has joined the Benedict XVI Institute for Sacred Music as Composer-in-Residence. His first major composition will be a new Mass of the Americas to be celebrated on December 8, 2018 at St. Mary’s Cathedral in San Francisco in conjunction with the annual Feast of Our Lady of Guadalupe. It is the first Mass composed for the Cathedral since the installation Mass in 1971.

So just how did La Rocca return to the Catholic faith? That too is a story.  Remember that high school rock band? The one that made the young Frank La Rocca one of the cool kids in high school?

In 2010, one of his best friends in that band died of a brain tumor, and Frank decided to fly to New Jersey and revive the old band for one weekend. “I really wanted to reunite the band in his honor: go into someone’s basement and play all the old songs,” he recalled. So Frank flew to Newark airport and on the plane he passed the time reading Father Richard John Neuhaus’ book Catholic Matters.

“Already because of Jay’s death and the shock of mortality it gave me, I was a great admirer of Fr. Neuhaus. I’d grown disenchanted with the Protestantism my wife and I were around. Especially on abortion we couldn’t find a single Protestant church in our town that stood firmly and proudly against it.  When we discovered the Catholic Church’s stand on it we were deeply impressed: How can they so confidently condemn this?” he remembered.

For Frank, Pope Benedict XVI was as a rock upon which a soul could rest: “Benedict XVI was Pope then, and I followed his writings because I thought he was such a great moral leader, thinker; he was the glue that was holding the entire Christian world together in my eyes.”

Back in New Jersey for the funeral, Frank La Rocca went to Mass again for the first time in decades, at the very church in which he was baptized.

By the plane ride home, he knew he needed to return to the Church—but what would it mean for his unity with his beloved wife Lucia?

And then another miracle: One day shortly thereafter his wife Lucia came home from work one day and told him, “I’ve been listening to Catholic radio on my commute and I’m simply amazed at what I’m learning. I think I’m discerning that God is calling me to become a Catholic.”

Frank La Rocca would call it Providence, not coincidence: a husband and wife simultaneously but independently perceiving a call to Catholicism.

But before he could return to the Faith of his fathers, Frank La Rocca had to take another step. “I went to St. Margaret Mary in Oakland for Ash Wednesday. I was just astounded and moved by the fervor, the deep love of God and the deep acknowledgement of sinfulness and repentance that I saw in the people there. Over the next few days, I struggled with the realization that if I was going to rejoin I had to go to confession.  One thing I never quite believed about the Protestant account of Christian life is that all you have to do is ‘ask Jesus’ to forgive you and – boom –you’re good to go again.  I am grateful that my Catholic education as a young boy ingrained in me the utter necessity of the Sacrament of Confession for the absolution of sins. ”

He did not find the prospect at all appealing.

“I had a lot of bad sins to confess and I was petrified.  Not just of speaking of them before a priest but of finally confronting the utter horror of it all.  So, I looked at the schedule at St. Margaret Mary for confession on Saturday afternoon right before the first Sunday of Lent. I went upstairs, took a shower, all the while just coming apart with tensions and overwhelming emotion. But I walked into the Church, waited in line, got into the confessional and said: “Bless me Father for I have sinned. It’s been 42 years since my last confession.”

The priest gave him ongoing penances that he is still practicing a decade later, and spoke to him the words of freedom: “Now go live your new life.”

Maggie Gallagher is executive director of the Benedict XVI Institute for Sacred Music and Divine Worship. Find out more about Frank La Rocca’s work at FrankLaRocca.com 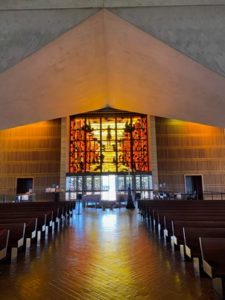